Connecticut Has Some of the Highest Student Debt in America

Once again, Connecticut shows us how expensive it is to exist in the state.  From a high cost of living, to high health insurance premiums, our students are now faced with some of the highest debt in the country.

Lets pop the champagne and toast to our newest honor from Forbes.  Connecticut is the third worst state in terms of student debt.  Yes, I understand that we are home to one of the most prolific universities in the history of ever.  But, lumping insurmountable debt onto the backs of graduates is basically the world’s worst modern economic practice. 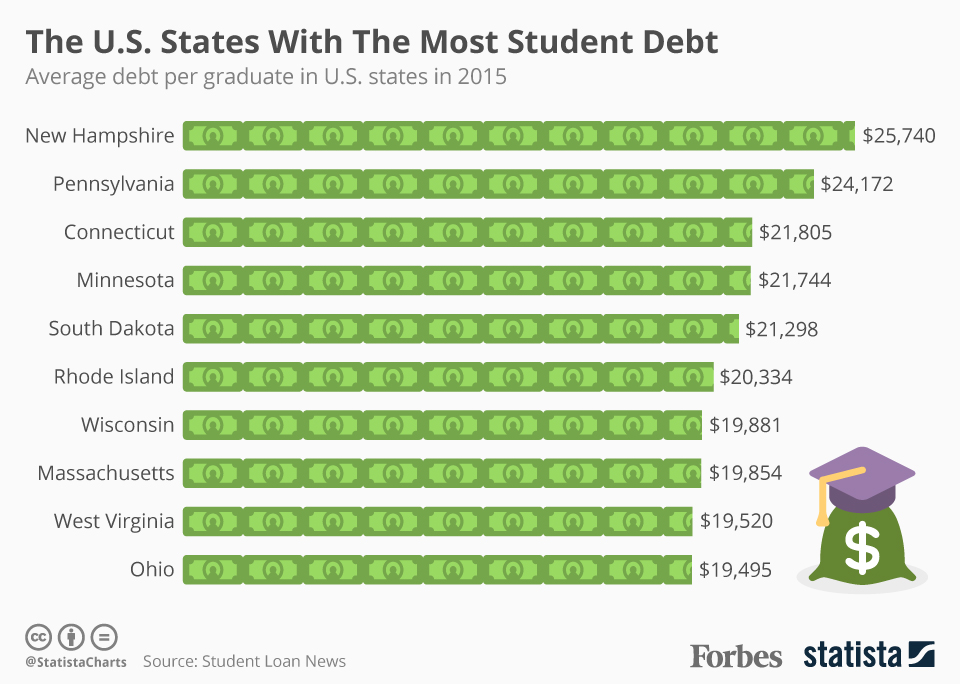 Our graduates amass an average of roughly $22,000 in debt upon graduation.  It’s insane!  That’s basically saying, “Hey, congrats.  Now you’ll probably be living with your parents until you figure this whole debt thing out.  Have fun!”

So, let’s be real here. Lots students WISH they only had $22k to worry about.  Honestly, it seems like most graduates are staring at a six digit number upon receiving their diploma and debt repayment notice.

Then, let’s add insult to injury.  Politicians and older generations then start complaining about those darn millennials not buying cars and real estate.  Millennials would be more than happy to make monthly payments on a new car or mortgage, but instead that money is going straight into a college’s coffers.

The cost of going to college has skyrocketed 1120% since 1978.  As early as the 1980’s, a student could work a part-time minimum wage job for the summer and pay the brunt of their college tuition.   Now, students are staring at working 52 weeks.  Minimum.  And that’s a number if the student forked over their ENTIRE salary, leaving nothing aside for groceries, gas, and rent.

I get that college is not for everyone.  But we’re in an economy where a college degree is the new high school diploma, it’s the new minimum requirement for employment.  Unless that changes, or colleges get cheaper… OR minimum wage goes up… this student loan bubble is gonna burst and it’ll be a LOT uglier than the housing market crash of 2006.