No, seriously.  They sucked.  This entire toll debacle deserves my unrelenting festering hatred.  Because the proposed toll locations were heartlessly insane.

On one hand, I’m glad that the house tabled the issue because they couldn’t muster enough votes (probably due to elections around the corner.)  On the other, there’s several lawmakers saying they won’t give up the fight for them because they’re the only way to properly fill the state’s transportation coffers.

CT News Junkie reports that one politician, Rep. Antonio Guerrera, will definitely work to resuscitate the matter.  Because he doesn’t believe a transportation lock box is good enough.  He told the House:

“We cannot afford to have another bridge collapse. To have a piece of concrete fall on a vehicle.”

Also, it’s obvious the lock box will most definitely be raided somewhere down the road.  So, there’s that.

But, that’s not what has me seething.

You know when our politicians promised up and down and side to side that tolls would only affect out-of-state drivers and be put on the borders?  Well, surprise!  They lied.

Then again, we already knew that when House Speaker Joe Aresimowicz famously told the Hartford Courant:

“We let people from Massachusetts, Rhode Island, New York, New Jersey, Vermont, Maine, and Quebec ride through the state of Connecticut and pay nothing. Tolls are coming. They’re not going to be border tolls. They will be all over the place.”

Anyways, our hero, Kevin Rennie (the same guy who broke the news about Aetna leaving Hartford,) uncovered where our politicians hoped to insert their planned moneymakers.  The short answer: all over the place, as Aresimowicz promised.

The longer answer: get ready to become really acquainted with CT’s back roads and staying at home more.

Basically, this plan effectively would mean goodbye to our entertainment and restaurant industry.  Because no one will want to cough up an extra $5 to $10 bucks to try a new restaurant a few towns or cities over.  They simply won’t.

With the cost of living at an all-time high, along with utilities, and an increase in the sales tax coming – people want to hold onto whatever little cash they have left.  Which means, recreational activities will take a huge hit.

Anyways, back to Kevin Rennie and his website Daily Ructions.  He got his hands on the state’s 2015 and 2016 “value pricing” studies that display how many tolls our lawmakers need to raise their promised $18 million.  Unfortunately, putting them up only on the boarders won’t cut it.  As they already probably knew.

So, they planned on putting them absolutely everywhere.

For example: if I, who lives in Milford, want to visit my parents who live near Durham.  I’d pass through a minimum of 3 tolls on 15 or 4 on 95.

How is that even possibly fair?  And what politician in their right mind will think I won’t waste my precious time barreling down side roads to save myself the cash?

I’m sure plenty of people would do the same thing, which would create a huge outcry from people who live on those side roads.  Not to mention the added wear and tear.

So, here’s the rates our lawmakers played with before shelving the issue:

Meanwhile, the average Connecticut resident commutes a lot further to work.  Chances are, they would pass under several potential tolling locations.

Connecticut’s super small so people comfortably live 40 or so miles away from work.  Not having tolls for 30 years promoted that.

Not to mention, we normally travel 40 miles or more to do anything fun in the state, like going to the beach or a museum or to Lake Compounce.  Everything’s super spread out in this state and, for the longest time, we didn’t mind it.

But, once these toll locations go up, guaranteed we’ll have a major issue.  And we’ll probably stay at home a lot more because of it.  Which, inevitably, will damage a good chunk of our entertainment industry.

Anyways, feast your eyes on what our lawmakers have planned for the southwestern part of Connecticut.  You know, where most commuters live? 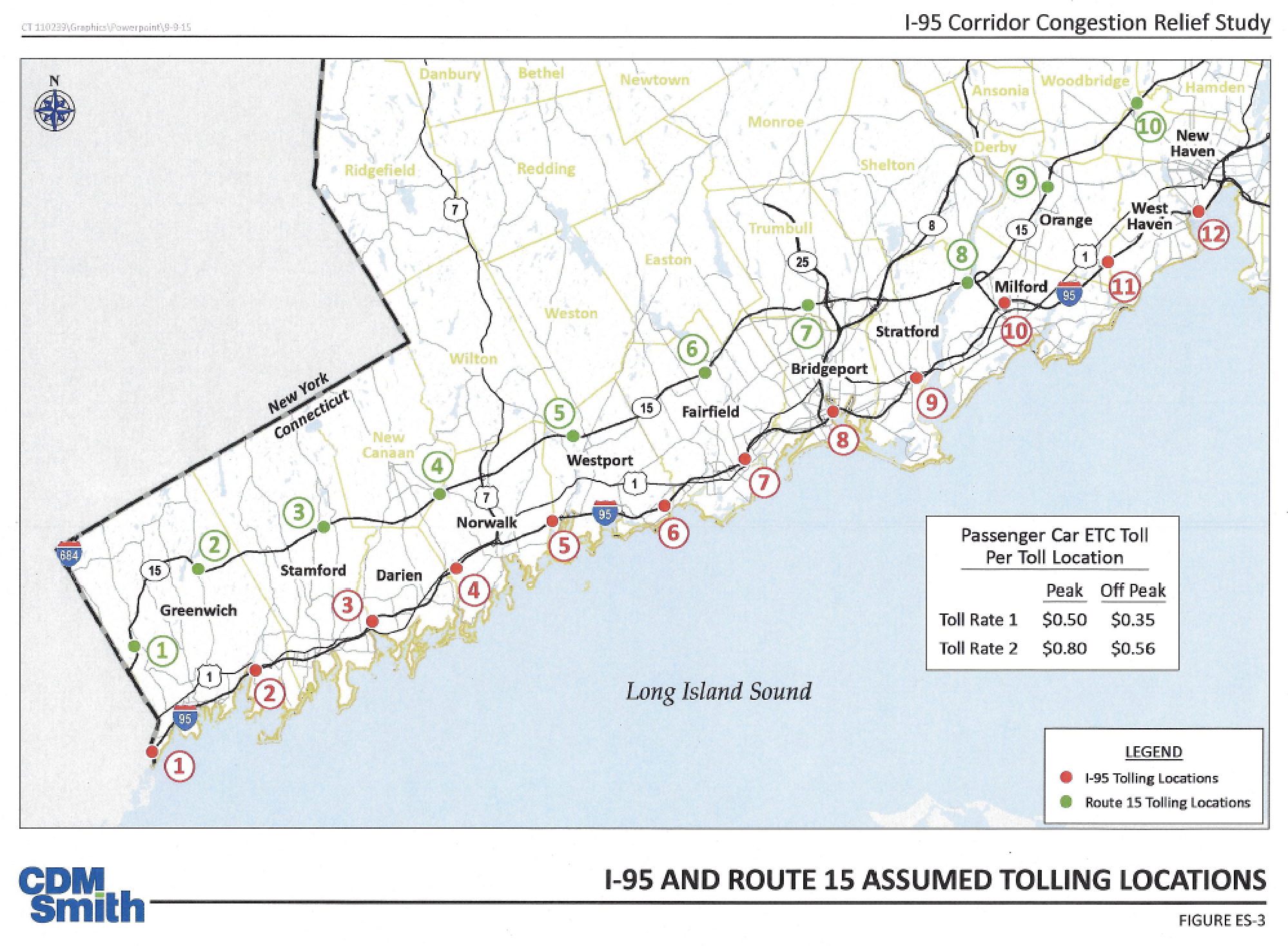 Who wants to bet more people will move to New York had these toll routes passed?

Considering all the dots covering a mere portion of 15 and 95, you can only imagine what would have happened to the other major roadways,

Also, toll-opponents feared that our politicians wouldn’t uphold their promise to do away with the gas tax once they went up.   So, that also created a major outcry with voters.

Just like when our politicians promised they’d do away with the state income tax after a few years.    And that’s the reason why so many of us are against tolls.

And, it’s obvious that this issue will come up again next year.  Should it also fail, then the year after that.

So, what do you think will happen should tolls come back to Connecticut?   Will they fix our transportation issues as promised?  Or will this create more side-road congestion or spur more people to leave the state?

I mean, approximately 500 people abandon this ship a week anyways?  What’s 500 or so more?

So what if they leave, right?