Nope, we’re nowhere near out of the woods.  In fact, it looks like Mother Nature dug us a shallow grave and will bury us under nearly 2 feet of snow.

First, let me admit that I abhor media hype when it comes to weather conditions.  There’s no point in freaking people out over a natural occurrence.  Okay, let me rephrase: there’s no point in terrifying the public over two inches of snow.

Because this is what happens: 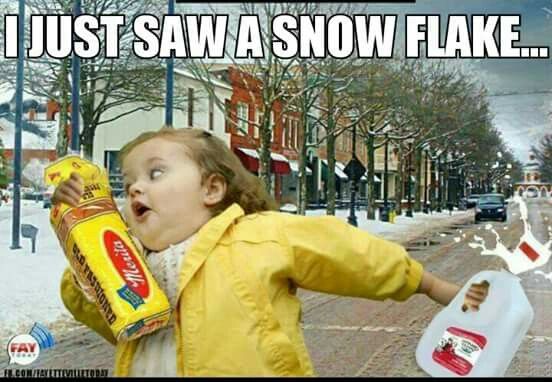 I remember all too well what happened around this time last year.  Remember the “Storm of the Century?”  The state was practically whirling in a state of mass panic.  I still have the photos my sister sent me of the barren bread and milk sections at her local Stop & Shop.

What happened next?  Well, when the big bad blizzard came knocking on our door, it turned out to be all rain. Yeah, WalMart saw a lot of shovels returned that day.

And, of course, we felt duped.  Conned.  They took us for fools!

And, most of us swore to never be tricked again.  Every weather report was taken with a grain of salt.

However, tomorrow’s storm is making me break tradition.  I admit that I am concerned about tomorrow.

The only reason why I am encouraging you to be prepared is because all the models seem to agree on one thing: Blizzard Eugene is a freak.  When the Coast Guard expresses a modicum of concern… that is when I worry.

WFSB says the state will kick off a Blizzard Warning tonight that lasts through tomorrow and into Wednesday morning.   The worst is slated for Fairfield, New Haven, northern Middlesex, and northern New London counties.

Right now we’re looking at 10 to 20 inches.  However, some portions of the state, like New Canaan, could see up to 2 feet.

It looks like we’ll wake up to about 3 inches of snow on the ground.  As the day goes on, snow could fall between 2 to 4 inches an hour and winds could gust up to 55mph.  By tomorrow night, we could see an additional 10 to 16 inches on the ground.

During the overnight into Wednesday, it’s possible another 2 to 4 inches could blanket the state.

Yeah, Eugene is moving pretty slowly at the moment, which means he has the potential to gift us with extra powder.

Honestly, prepare yourselves.  Make sure you have plenty of gas to rev up those generators and/or plows.  It also is advised you charge all your electronics, too.

So, stay safe out there tomorrow!  If you don’t have to be on the roads on Tuesday… don’t.  You’re doing the plows a huge favor by staying home.

Already, WFSB is reporting a healthy amount of closures and parking bans in preparation to tomorrow’s storm.  You can see the updated list HERE.